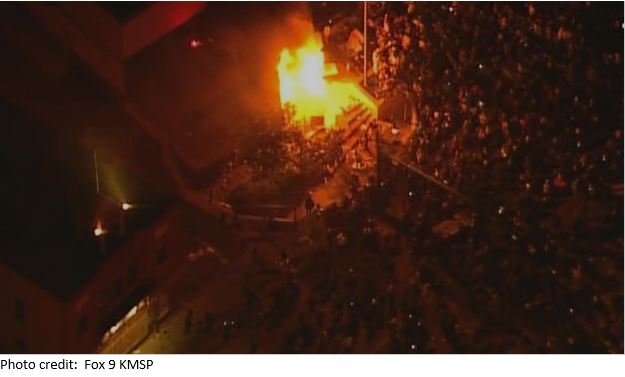 The photo above  is what the Minneapolis Police (MPD) Third Precinct looked like on May 28th, 2020. Just hours before, the police were ordered to pack up their equipment and leave.

Mayor Frey said the MPD didn’t have the manpower to control the mob, and news reports blamed him for not asking Governor Tim Walz to mobilize National Guard troops to help, with Governor Walz eagerly piling on:

“Jacob Frey has been cast as the mayor who lost control of his city, enduring criticism from the state’s governor [Walz] that the Minneapolis response to rioting in May over the police killing of George Floyd was an “abject failure.” Star Tribune, August 4th, 2020.

At the time, foolishly believing anything said by the Red Star Tribune and its sister propaganda organs, I blamed Frey.

Turns out the Red Star and its sister media hadn’t done their job. Frey asked Walz for the guard the day before 3rd Precinct was burned, and again – frantically- the day of the attack, supported by his then-police Chief Medaria Arredondo.

Walz’ response to Frey? ‘Well, your request is too vague…start over.’

Walz claimed the National Guard could not accept a verbal request and required a ‘more detailed plan’.

“As a 24-year veteran of the Minnesota National Guard, Governor Walz knows how much planning goes into a successful mission,” [Waltz spokesman Teddy] Tschann said in a statement. “That’s why he pushed the City of Minneapolis for details and a strategy. He ordered the Minnesota National Guard to start preparing Thursday morning which allowed them to deploy to both St. Paul and Minneapolis that evening, per the mayor’s requests.”

The National Guard serves two major purposes: As a reserve for the US military, and as the military force of the state governor. The National Guard is required to train for disaster response every year. Including riot training. Walz, in fact, worked in multiple disaster response callups while in the Guard. While a congressman, he constantly boasted that he was the highest-ranking enlisted man ever to serve there. Walz held the rank of Command Sergeant Major, the highest enlisted rank – but he mysteriously did not retire with that rank. More on that in another issue of the Newsletter.

In other words, Walz lied. And government documents recovered through data requests prove it.

I was never in the Minnesota National Guard, but I did serve in and train for disaster in the Washington Army National guard, and while I was still on active duty stationed with the Minnesota Army Reserve, I coordinated with the Minnesota Guard for joint Guard/Reserve disaster (including riot) training, because the Army Reserve also trains for disasters. I can tell you that normally a request for Guard assistance would come through the Governor’s office. If the Governor approved, he orders the Guard to duty, and the Guard determines what units were needed to complete the mission. While the units assemble (which takes a few hours at most, not days) the unit officers write the operations order.

No one but Tim Walz knows why he refused to activate the guard until far too late. Do you think this former career teacher and long-time member of the same teacher’s union that now says parents are incompetent to control their kids’ education just might have preferred to let the 3rd Precinct and the whole neighborhood around it burn rather than deal with the political fallout of stopping the riots?

Tim Walz is not only a liar, he is at least a moral coward, willing to burn whole neighborhoods to his political advantage. No coward is fit to govern Minnesota.