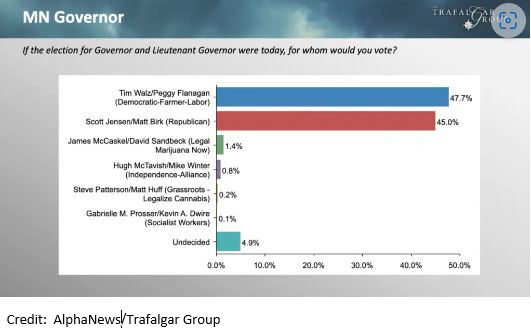 Our local media has made a lot of the KSTP/Survey USA poll conducted from August 30 to September 4 of Minnesota voters regarding their preferences for Governor, Attorney General, Secretary of State, and Auditor. Typical headlines read, “Walz expands lead over Jensen to double digits."

The first-ever AlphaNews/Trafalgar Group poll paints a much different picture. Just released, the poll was conducted by the organization that correctly predicted President Trump’s victory in 2016.

While this new poll still has Walz leading Jensen by 47.7% to 45%, the results are within the margin of error, nowhere near an 18-point difference.

The poll also shows that Jim Schultz and Ryan Wilson are slightly ahead in their races for Attorney General and Auditor, respectively. Kim Crockett’s Secretary of State race is very close, well within the margin of error.

This is a call to redouble our efforts. These candidates are working very hard. We need to do everything that we can to help them win.