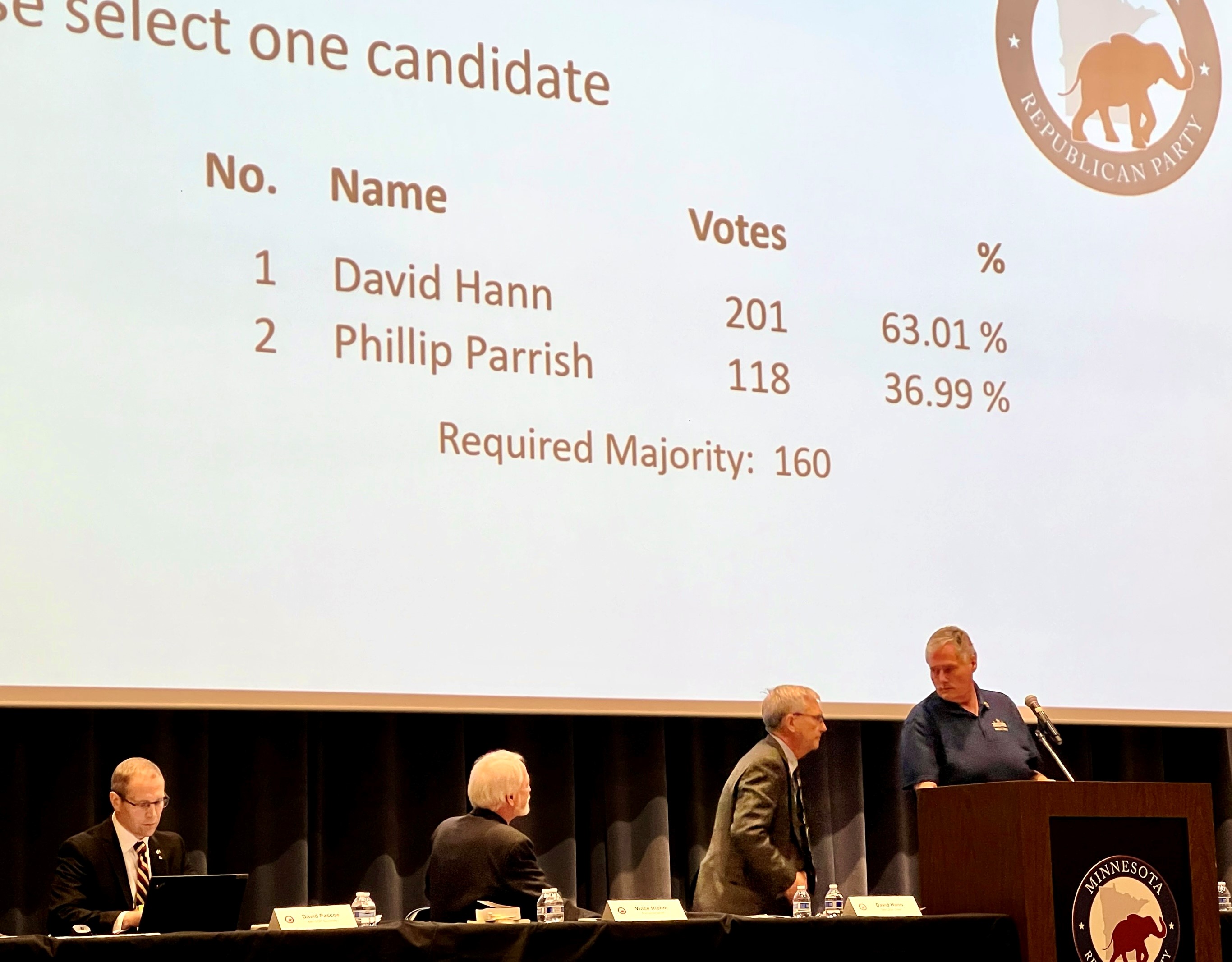 The State Central Committee of the Republican Party of Minnesota (RPM - also often shortened to MN GOP) met in St. Cloud on Saturday, December 3. This Committee is empowered by the RPM Constitution with the general management of the Party. The RPM Bylaws call for the election of the State Party Chair, Deputy Chair, and Secretary every two years, at the December meeting held the month after a presidential or state governor election.

The delegates and seated alternates at the State Central Committee meeting voted to re-elect David Hann as Chair and Donna Bergstrom as Deputy Chair. They elected Jenna Dicks to replace David Pascoe, who chose not to run for re-election.

This State Central Committee meeting included some contention regarding the RPM Chair election. A majority of the delegates and seated alternates ultimately voted to override a ruling of the chair of the meeting before that vote could take place.

To be placed on the ballot for a state party office, candidates each needed to submit 30 nominations from State Central Committee delegates that pledged to vote for that candidate on the first ballot by no later than Wednesday, November 30 at 5 pm. David Hann, the current incumbent, was the only candidate for MN GOP Chair that met that requirement. Phillip Parrish, of Kenyon, had submitted 30 names by the deadline, but some were alternates and at least one had pledged to vote for more than one candidate on the first ballot. Parrish’s name did not appear on the ballot.

Soon after the meeting got underway Saturday morning, a motion to overturn the rule stipulating the deadline for delegate pledges was passed by a floor vote. A majority of the delegates and seated alternates further voted to overrule the chair of convention, who had acted to block the candidacy of Parrish because he had not met with the Nominating Committee. A motion to close nominations passed before any further candidates for Party Chair could be made from the floor.

After these actions to ensure that there would be a contest for Chair, David Hann won re-election by 63% to 37%.

The contest for Party Deputy Chair was more straight forward. The incumbent, Donna Bergstrom of Duluth was opposed by Nora Greteman of Monticello. Bergstrom bested Greteman by 59% to 41%.

Three candidates came forward to succeed David Pascoe as Party Secretary. Jenna Dicks of Woodbury won on the first ballot with just over 50% of the votes, over Karen Attia of Champlin and Alec Beck of Minneapolis.

The State Central Committee is composed of the Delegates and Alternates elected at BPOU conventions in 2021, prior to the 2022 redistricting, who continue to live within the boundaries of the BPOU as they existed up to 2022. Senate District 50 had four (4) delegates elected in 2021. One has moved out of the district, two did not attend and one serves as Chair of the 3rd Congressional District (CD3) and gave up his SD50 delegate position. As a result, four of SD50’s alternates were seated. A fifth SD50 alternate, sixth in line, was able to be seated due to cross-seating in a vacant position in another senate district within CD3

The terms of these Delegates and Alternates ends with the election of new representatives during the BPOU conventions in February-March 2023.