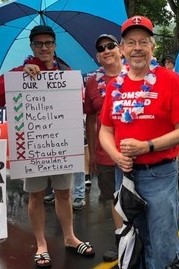 SD50 Rep. Steve Elkins (D) issued another newsletter to constituents on July 7, and it continued to reflect that his legislative priorities and personal alignments are out of touch with the voters in Edina and Bloomington.

Elkins led off the newsletter with a picture showing him with sign-carrying DFL supporters. It is ironic that the closest sign carried the message that all of Minnesota’s DFL Congressional delegation protect children, while none of those in the Republican delegation do.

Really? How have the DFL efforts to defund the police stopped the drive-by shootings of children in Minneapolis? Has Elkins and his party supported legislation to give students and their parents the freedom to go to the schools of their choice? Did Elkins and his party ever truly consider the ramifications of shutting down schools and isolating kids:  on their mental health, educational achievement, and social skill development?

How non-partisan was the absolute DFL support for Gov. Walz’ arbitrary closure of small businesses, throwing so many of our most economically-vulnerable people out of work?

Elkins’ newsletter goes on to say:

"At this point, it appears unlikely that a special session will be called as Senate Republicans are unwilling or unable to make the compromises necessary to come to a final deal. After the primaries, these legislators will have more room to negotiate. This will be of little solace to school districts or personal care provider organizations that are trying to balance their budgets, now. The collateral damage from our legislative inaction is immense."

Note that Steve Elkins never acknowledges that taxpayers have their own budget issues, facing the highest inflation in over 40 years. The largest biennial budget in the state’s history was passed and signed by Gov. Walz in 2021. This year was a year that the state legislature should focus on bonding bills. Yet, faced with a $9.25 billion revenue surplus, Republicans reached a bi-partisan agreement to a one-time expenditure of a little over $2 billion.

After initially wanting to spend all of the surplus, the governor blatantly offered to issue “Walz Checks” while continuing to push for more spending. Elkins’ newsletter certainly shows that he personally supports the spending part.

The Republicans are right to demand that the budget surplus be returned through tax cuts, to help mitigate the loss of buying power due to inflation. As reported in US News & World Report, the most likely way that this will happen is if Republicans are voted into the majority position in both the MN House and Senate this fall.