I have often called my home state of Washington Minnesota’s political evil twin – the only difference being that instead of the Cities/Outstate, in Washington the political divide is west of the Cascade mountains (politically regressive *) and east of the Cascades (politically conservative). I just returned from a month in Seattle and got a good long look at its politics.

*I refuse to continue calling Democrat politics ‘progressive’ or ‘liberal’. They want to return to an era when the state controlled everything – under monarchs, for example. That’s regression, not progress. And ‘liberal’ comes from the Latin and means ‘suitable for a free man’ – policies the Democrat party opposes.

Seattle’s burgeoning homeless population is not helped by the fact that unlike Minneapolis, there is no unbearably cold winter. Tent cities remain year-round. The picture above shows the takeover of a shelter in Woodland Park, which also houses the city’s zoo. A number of other public spaces have been invaded and taken over by tent cities.

The state’s courts have ruled that campers and RV’s are the owner’s ‘residences’ and therefore the owners can’t be forced to pay a towing fee even if they are illegally parked for months. The picture below is of an RV encampment, complete with health-threatening garbage on the street and sidewalks, about eight blocks from Broadmoor, a gated community housing some of the wealthiest people in the city. 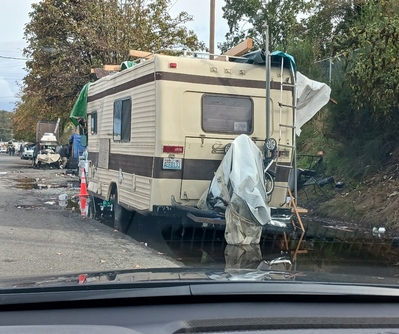 Downtown is now so bad that businesses are moving out. A law school friend who owns a $100 million dollar chemical supply company moved her entire operation to another city because her female employees were being assaulted by homeless thugs and customers didn’t want to walk through the human excrement that blocked her entry doors every morning. And businesses are paying companies to zoom in after midnight and drop huge concrete blocks – they call them “eco blocks” - on their sidewalks or curbs to prevent homeless critters from camping/parking there.

The city council features Kshama Sawant, who survived a December 7, 2021 recall petition by .76% because her hardcore collectivism was too extreme even for Seattle. She is a member of the Socialist Alternative party  and advocates for the nationalization of Boeing Aircraft, Microsoft and Amazon, at one point urging Boeing workers to take over the company by force if it tried to leave Seattle (founded in Washington, Boeing did move its headquarters out of state); taking over expensive houses on Capitol Hill (which overlooks downtown Seattle) and making it socialized housing, commenting that “ When things are exquisitely beautiful and rare, they shouldn't be privately owned." Sawant called for a revolt against student debt saying that "the laws of the rich are unenforceable if the working class refuses to obey those laws". Sawant is an active member of the American Federation of Teachers, and criticizes it for not being socialist enough. She also calls for granting unconditional citizenship to anyone living in the USA and for mass riots to shut down highways, airports and other key infrastructure. Following a shooting in the so-called Capitol Hill Auto-nomous Zone (CHAZ), that left one man dead and another critically wounded Sawant said there were " ‘indications that this may have been a right-wing attack,’ for which President Trump would bear ‘direct responsibility, since he has fomented reactionary hatred specifically against the peaceful Capitol Hill occupation.’ ” This was too outrageous even for Sawant – criticism forced her to walk the claim back. The CHAZ was a park occupied by protesters formed after the Floyd murder riots.

Seattle has declared war on cars. Narrow streets which used to have parking on only one side now allow it on both, making the streets almost unusable. New high-rise apartments are being allowed in residential neighborhoods with no requirement for on-site parking. It used to take me fifteen minutes to drive from Capitol Hill to the Ballard area during the middle of a weekday. It has taken me as long as an hour now. The city has taken to randomly marking streets NO THRU TRAFFIC on critical side streets to force drivers to go five miles out of their way.

If you want to know where Minneapolis/St. Paul are headed, visit Seattle.