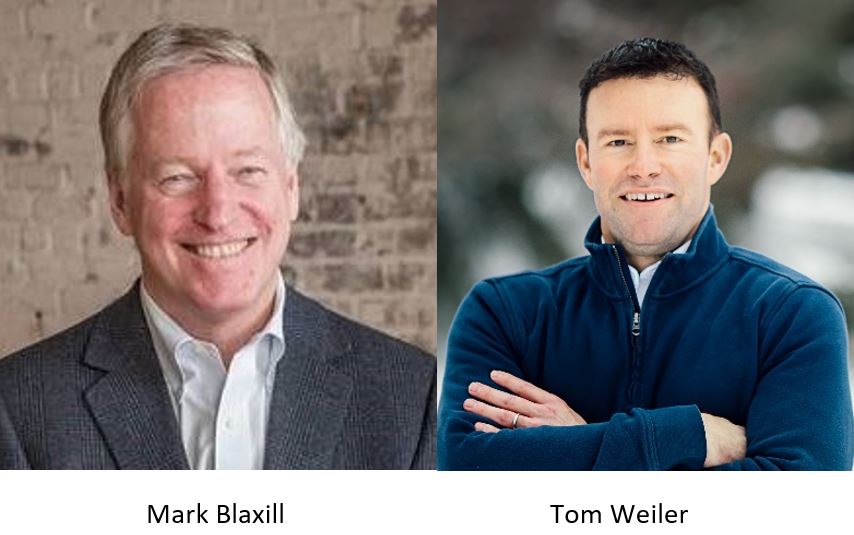 Mark Blaxill and Tom Weiler, candidates for Congress from the 3rd Congressional District, met in a forum on Monday, April 11, to talk about themselves and answer questions.

The forum was skillfully moderated by Mitch Berg, radio talk show host and founder of the Northern Alliance Radio Network on “The Patriot 1280.  The candidates spoke thoughtfully and candidly about the challenges and opportunities in the upcoming campaign and why each represents the best candidate to go up against Democratic Congressman Dean Phillips.

While respecting Phillips’ skill as a political opponent, Mark Blaxill intends to go after him as a creature of Washington.  “He supports the wrong brand.”  He noted that Phillips’ voting record in Congress closely matched Democratic Speaker Nancy Pelosi.

Tom Weiler plans to go forward as a patriot, certain that Minnesota voters more closely shares Weiler’s views.  Noting that Phillips ”did not speak out against the Minneapolis rioting after the death of George Floyd", Tom said, “Phillips has failed to provide the leadership our district needs.”

Mark Blaxill believes that his strength lies in his entrepreneurial experience.  He has a broad appreciation with how government policy interferes with the private sector.  “Less regulation is more.”

Tom Weiler points to his Navy experience.  Tom’s service included opportunities to draft legislation, in doing budget work on funding the border wall, and in getting international exposure as an aide to a senior Admiral.

On the role of our Congressional representatives in pushing policies at the state level, Weiler pointed out that they have a “bully pulpit”.  “Phillips did not recognize that the riots demanded that he speak out.  Blaxill would use his position to correct the “raw deal” that Minnesota gets financially from the federal government.  On average, Minnesota loses $1000 per person to other states.  He is not asking for more money through higher taxes, but a fairer distribution of the money that the government already gets in taxes.

When asked how each candidate would respond when asked about Donald Trump, Tom Weiler said that he would stress the effectiveness of the former President’s policies.  Mark Blaxill would counter with the offenses of the Biden family.

Weiler’s campaign will focus on crime, inflation, and education.  He will defend the values at the foundation of our country, not tear them down.  Calling himself a Constitutional conservative, Blaxill felt that inflation should be the focus of Congress, while crime and education should be dealt with at the local level.  Weiler countered that Congress’ George Floyd policing bill would bring the federal government oversight into local law enforcement.

Asked their positions on lockdowns, Weiler replied that he does not support mandates. “I respect individual freedoms and liberties."  Blaxill stated that he has spent 20 years fighting for health freedom.  He fully supports the power of the free market in health care.

Would either candidate support the Balanced Budget amendment?  Tom Weiler felt that federal spending is a problem.  He would not support the amendment, but would attack superfluous spending.  Mark Blaxill agrees with the amendment in concept, but feels it would be hard to do.  “Washington is a parasitic beast.”

When asked to identify his first official act, Weiler said it would be a “No” vote for Nancy Pelosi as Speaker of the House.  Then he went on to stress his plan for a 2-year budget.

Moving on to immigration, Mark Blaxill argued that the US should welcome immigrants but the borders must be controlled.  “Open borders challenge the concept of a sovereign country.”  Tom Weiler stated simply, “Illegal immigration is illegal immigration.”  He holds that border walls are effective,  He would support an examination of our full immigration policy.

On education, Weiler said that Congress should be pleased that parents are getting more involved in their children’s education.  The focus of education should not be “race, reproduction, and recycling.”

Asked about US Defense Policy, Mark Blaxill noted that the US rebuilt the world, including former enemies.  Many have “developed on the back of US workers.”  He strongly believes the focus should be America First.  Tom Weiler felt that defense officials should focus on deterring war or winning war, not on energy policy or social adjustments.

Regarding US military support of Taiwan, Mark said that the US should defend its vital national interests.  However, war must be declared by a vote of Congress.  We need to avoid nuclear war.  Tom responded that we avoid war through strength.  The US needs to actively deter war.  “Show strength now.”   When asked about Ukraine, Tom supported sanctions and the sending of weapons, not US troops.

If asked about abortion, Blaxill will point out that it is a state issue.  “The Supreme Court made the wrong decision years ago “

On US energy policy, Tom Weiler would expand fracking and develop all sources of energy with the goal of restoring US energy independence.  Mark Blaxill said that “the Left is declaring war on petroleum. We could lead the world in energy if we unleashed energy development.”

Blaxill underscored the need for a strong Republican state party as the foundation for the upcoming campaigns.  He believes that Republicans in Minnesota are more together now than we have been for a long time.

Both Weiler and Blaxill committed to abide by the endorsement vote at the upcoming CD3 convention.