Edina witnessed one of the largest contingents of Republicans ever to march in its July 4th Parade.  Drizzly rain leading up to the start meant that Senate District 50 elected to keep the tops up on their convertibles and the inflatable elephant stored away in Carol Kerr’s trunk.  However, the banners were unfurled, and the marchers stepped out with great enthusiasm when the parade kicked off.

Edina’s July 4th Parade is one of the largest in the southwest Twin Cities area.  In a year of state-wide political elections, the large Republican turn-out was a clear indicator of excitement and support of our candidates.

In addition, State Auditor candidate Ryan Wilson and 5th Congressional District candidate Cicely Davis had separate parade units and a number of their own supporters. 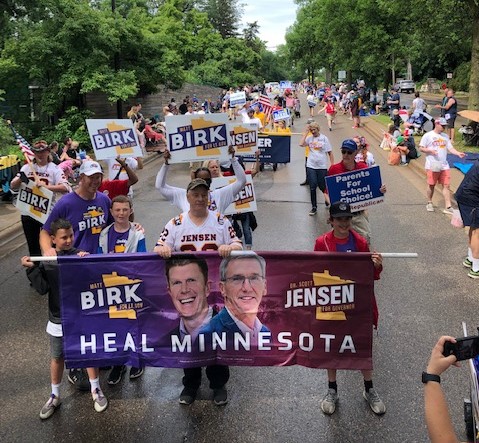 To watch a video clip of the Republican parade team, check out the video segment at 26:30.  Go to segment 28:30 to see Cicely Davis and her supporters, then to 31:30 to see Ryan Wilson and his supporters.

Joel Quinnell gets the credit for the detailed planning that went into the great showing.  Thanks also to Julia Tate for keeping track of the participants, and to Carol Kerr and John Ward for driving their beautiful red convertibles in the parade.