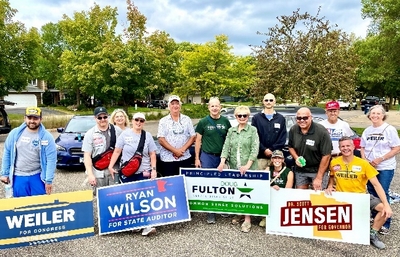 Doug Fulton was particularly appreciative. He said that, with the help of these volunteers, he more than met his goal of completing a precinct in west Bloomington.

“The CD3 volunteers knocked it out of the park!”, he said. “There were enough volunteers to complete their areas in two hours or less.”

Congressional candidate Tom Weiler walked in a parade in Plymouth and then also came with volunteers to door-knock. It was a busy day in Bloomington.

The more volunteers that turn out, the more voters can be canvassed. Door-knocking is still the most effective way of getting the names of our candidates and their message out. We are the Red Wave! Please give a few hours of your time each week and be part of a winning movement.