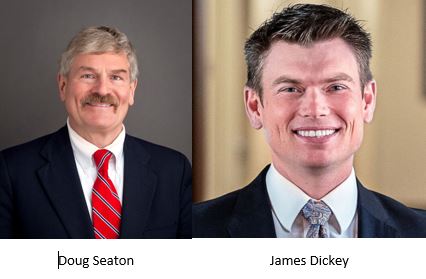 The Pints & Pent-up on-line forum held on May 19 featured the impactful work being done by Doug Seaton and James Dickey.  These two attorneys are the litigating power behind the Upper Midwest Law Center.

The UMLC is a center-right, non-profit, public interest law firm willing to take on legal battles in Minnesota when public officials and government unions exceed their authority and infringe on personal liberties.  Their work is particularly important when officials, elected to uphold our laws, act counter to those laws.

The UMLC is 100% donor-funded.  Their mission is to take cases that they believe advance values of liberty, equality under the law, the rule of law, constitutional limitation on government authority, and limitation on government union abuses.  The forum highlighted the important cases that are being pursued on behalf of individuals who would not be able otherwise to seek redress due to the ever-increasing expense of attorney fees.

Stop the Defunding of the Minneapolis Police (Spann v. Minneapolis City Council) – The Minneapolis City Charter requires that the City fund and employ a minimum number of employees of the “police force” equal to a specific percentage of the population of the city. Based on that formula, Minneapolis should be employing 751 officers.  Currently, there are fewer than 650 officers active and enforcing the laws.  The judge in the case ruled that the Mayor Frey and Council President Lisa Bender may be deposed.  UMLC found that the number of officers will continue to dwindle absent Court intervention.

Overturn Governor Walz’ general Shut Down Orders (Northland Baptist Church vs. Walz) – UMLC filed suit in May 2020 on behalf of two churches and three small business against Governor Walz’ overreaching COVID-19 shutdown orders. The judge in the case denied a motion to dismiss against the churches, and UMLC secured a settlement with Governor Walz and Attorney General Ellison ensuring that they can no longer restrict houses of worship more harshly than Target and other businesses favored by Walz. UMLC will appeal the judge’s decision to dismiss the claims of the business clients.

Invalidate Walz’ mandatory mask-wearing order (Snell v. Walz) – In August 2020, UMLC filed a lawsuit on behalf of 15 Minnesotans, businesses, and churches. Ramsey County District Court judge denied the UMLC motion for an injunction and dismissed the case.  However, three days after UMLC filed an appeal, Governor Walz dropped the mandate (except as it relates to schools).  UMCL intends to continue with the appeal until Governor Walz formally agrees that he cannot re-impose the mask mandate using his illegitimate COVID-19 powers.

Bar the granting of State employee pay raises without legislative approval (O’Neill v. Schowalter) – Rep. Marion O’Neill and Sen. Mark Koran were the plaintiffs in a lawsuit against the Commissioner of Management and Budget. UMLC argued that Commissioner Frans illegally implemented pay raises for public employees during an economic decline without approval by both houses of the Legislature, which is required by law.  While the Commissioner could go forward and get agreement from both houses, AG Ellison chose to file a motion to dismiss.  The court’s decision on UMLC’s motion for a temporary injunction and Ellison’s motion to dismiss is expected in June or July.

Stopping union abuses to collect dues (Post-Janus Union Dues Abuse Cases) – Despite the Supreme Court’s 2018 Janus decision, government employee unions continue to force employees to pay dues, UMLC has brought four different cases, and is co-counsel in four other cases, where dues were taken even after employees resigned from the union and demanded that payments be stopped. Two of four UMLC cases have been settled favorably and two are underway.  The co-counsel cases are currently on appeal in the federal court system.  Without the intervention of UMLC, it is likely that the government unions would simply ignore the requirement for consent and keep taking employee dues.

Challenging Critical Race Theory imposition by governments – Schools and other government employers in Minnesota are promoting CRT through the force of law to create legal distinctions between people based on race or ethnicity. In some instances, schools are forcing students to learn CRT racist concepts and sometimes regurgitate them as their own speech.  The latter is compelled speech and violates the students’ First Amendment rights.   UMLC is developing several cases in Twin Cities public school districts on behalf of state employees who object to having this anti-American indoctrination forced on them.

These are just some of the cases on which the Upper Midwest Law Center is focused.  Confidential, tax-deductible donations would enable additional litigators to be hired.