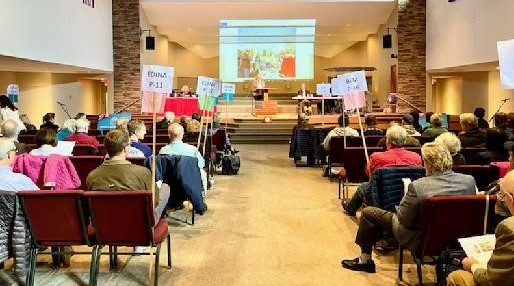 Senate District 50 Republicans hold a convention in the spring of every year.  The purpose of the convention in 2023 is to elect senate district executive officers and State Central Committee delegates and alternates.  The officers, delegates, and alternates will all serve two-year terms.

The Senate District 50 Bylaws[SD50GOP Bylaws - SD 50 GOP] stipulate that the Executive Committee Officers will consists of two co-chairs, ten vice chairs, a treasurer, a secretary, and a communications chair.  All will be up for election/re-election.

The State Central Committee is responsible for the general management of the affairs of the Republican Party of Minnesota, subject to the control of the State Convention and MN GOP Constitution[MNGOP Constitution Approved May 14 2022_V1].  Three-hundred (300) delegates and up to nine-hundred (900) alternates may be elected from within the state’s eight Congressional Districts.  The state party constitution provides for additional delegates and alternates, but the primary source of delegates and alternates are the ones elected every odd year at the senate district conventions.

The SD50 Republican Bylaws call for all officer candidates to be interviewed by the SD50 Officer Nominating Committee.  Similarly, all State Central Delegate/Alternate candidates should be vetted by the same Committee.  The committee chair will place in nomination those candidates they recommend.  No nominations will be accepted from the floor of the convention.  Note that the Bylaws stipulate that the SD50 Co-Chairs will be considered elected as State Central Committee delegates by virtue of their office.