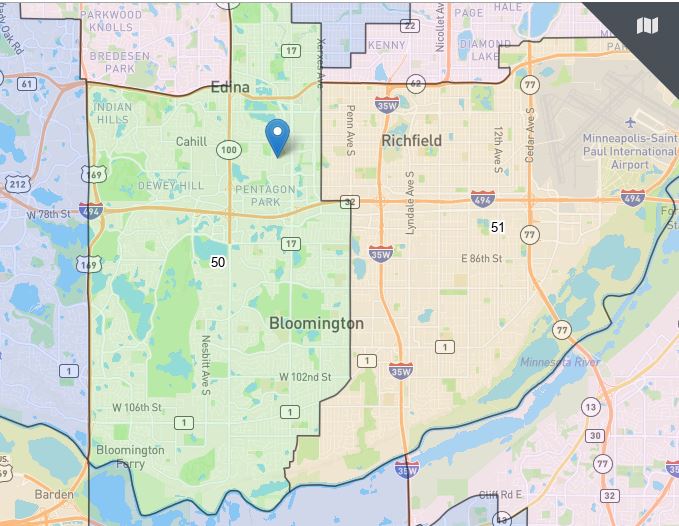 At noon on February 15, the special judicial panel empowered to rebalance the voting strength of Minnesota’s legislative districts, issued its maps. Suddenly, we are no longer Senate District 49. We are, in a somewhat altered form, now Senate District 50.

Our new district is shown in green on the map above The area shown in pink that includes the eastern portion of Bloomington and all of Richfield is now Senate District 51.

NOTE: it may take a few weeks to convert websites and email addresses over to the new senate district designations. In the interim, we will continue to use the SD49GOP domain name.

Nine of our 34 precincts have been ceded to adjacent redrawn senate districts. Three precincts on our far west are now part of a new Senate District 49, comprising primarily Eden Prairie and Minnetonka. Six precincts in northwestern Edina (the neighborhoods north of Highway 62 and west of Highway 100) have now been joined with the city of Hopkins and much of St Louis Park to make up the new Senate District 46.

To compensate for the loss of those nine precincts, the southeastern boundaries of the new Senate District 50 have moved east. Parts or all of nine Bloomington precincts in the center of Bloomington have now been joined with the 11 western precincts and 14 Edina precincts.

The new Congressional and Senate District boundaries divide some old precincts because the Court uses census tract boundaries that don't align exactly. Usually municipalities have been prompt and efficient in adjusting precincts. MN Statute 204B.135 requires cities with wards (including Bloomington and Edina) to redistrict at least 19 weeks before the primary. With the primary this year falling on August 9, we should expect new precinct maps by March 29.

You may view more detailed maps showing the district boundaries at the MN Legislature’s Mapping Service page CLICK HERE. You may also choose the interactive map to lookup district assignments by street address.