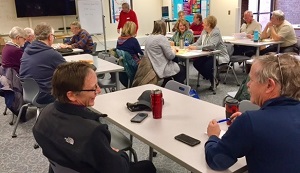 Minnesota is one of a few states that still recognizes the value of citizens meeting together in neighborhood groups to renew their political parties every two years. On Tuesday, February 1, Republicans across Minnesota will be gathering for precinct caucuses. The future of our Party and Nation belongs to those who show up.

Citizenship starts in the community. To make certain that communities and cities are based on self-governance, citizens need to be active. We as Americans need to begin playing the traditional role of good, concerned citizens. One way to “get into the arena,” as Theodore Roosevelt urged, is to engage in the grassroots process called caucuses.

The midterm election season is underway. In three weeks, we begin the work of deciding who we want to represent us. If you wish to see a change in our Party or to influence which of the candidates gains the delegates needed to be endorsed, precinct caucuses are your chance to stand up and be heard. Attend your caucuses and make a difference!

Doors will open at 6:15 pm, and the caucuses will convene at 7:00 pm.
During your precinct caucus, you will
• Elect your precinct officers
• Elect your delegates and alternates to the Senate District convention in March
• Learn about the scheduling of the local, regional, and state conventions in 2022 and how you could become a delegate or alternate to these important party meetings
• Submit and debate amendments to the Republican Party platform
• Learn about candidates seeking the Republican endorsement to run at the local and state level and how you can support the ones that best represent your views
• Vote in a straw poll for the Republican candidates running for MN governor

This year is also a redistricting year. The results from the 2020 Census could lead to changes to Minnesota Congressional Districts, Minnesota State Senate and House districts and thus change how our local Republican party is organized geographically. These changes will be announced on or around February 15.

While redistricting might affect what senate and/or congressional district you are in, if you are elected as delegate or alternate you will continue to be one for your precinct. It is a 2-year term.

Whether your interest lies in being a delegate to a convention, being elected to local party office, promoting a candidate for local or state office, or just being part of the democratic process at the grassroots level, demonstrate your commitment by attending the Republican caucuses on February 1.