Minnesota Republicans are planning and preparing for the 2018 election year.  Next year, we will endorse candidates for state-wide office (governor, lieutenant governor, attorney general, secretary of state, and auditor), one U.S. Senator and all of our U.S. House representatives, as well as all Minnesota House members. 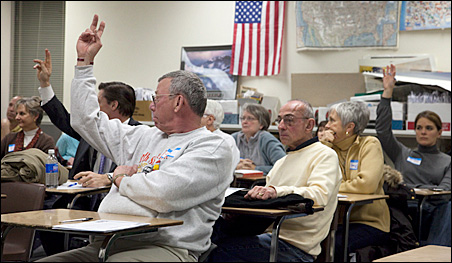 While all elections are important, the chance to elect a new governor and set a new direction for Minnesota is particularly exciting.  You can play a part in deciding the team that Republicans will put forth, but you have to get involved early.

We will kick off this ambitious year with local caucuses on Tuesday evening, February 6, 2018.  By attending your caucuses, you directly elect your precinct leadership and your delegates to the senate district conventions.  If you put yourself forward for these positions, you stand a good chance of being elected by your neighbors.  You can also put forward amendments to the Minnesota Republican party platform.

The newly-elected precinct chairs will meet in late February to nominate delegates and alternates to the congressional district and state conventions.  Delegate and alternate slots that are not filled in this process will be open to floor nominations at the senate district convention.  This process is intended to favor Republicans who are committed to supporting and building the local party and are willing to stay engaged beyond the conventions.

Delegates elected in the Senate District 49 caucuses will convene on Saturday, March 17, 2018 for the SD49 Convention.  As a delegate at this convention, you will consider for endorsement the candidates for Minnesota House Districts 49A and 49B.  You will also vote for or against platform amendments put forward from the earlier caucuses.

While the specific dates and locations of the various congressional district conventions have not been announced, they will likely be held on a Saturday between April 14 and May 15. The CD3 convention will be April 14, 2018.