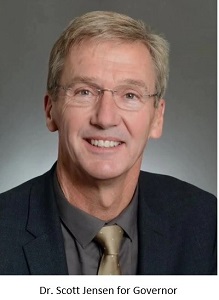 3rd District Congressman Dean Phillips was recently quoted by the Star Tribune as saying, when speaking to the political division in our country, "I'll be trying to be part of the solution." Yet only a few days earlier, he lashed out at Dr. Scott Jensen, Republican candidate for MN Governor.

On the evening of August 23, all of our state-wide candidates and the Congressional candidates in the 2nd, 3rd, 4th, and 5th Congressional Districts spoke to a standing-room only forum hosted by the Republican Jewish Coalition. When it came time for Dr. Jensen to speak, he tore up his prepared remarks and spoke to an audience that has experienced how government overreach, coupled with the complicity of the media, can grow from little injustices to something much more insidious.

Dr. Jensen gave a similar speech in April to the group Masks Off Minnesota. A video of a portion of that talk can be heard on a Twitter post by Heartland Signal .

Dean Phillips also jumped on board. He tweeted,
"I believe in our freedom of speech," Phillips tweeted, "but comparing Nazi Kristallnacht, which murdered human beings, to the wearing of masks to reduce COVID transmission, which saved human beings — is repulsive and shameful."

Rather than being part of the solution, Phillips continues to miss the point. Dr. Jensen is talking about the incremental steps that that we have seen in our society. The banning of conservative speech on social media. The lack of transparency in death records that over-counted deaths attributed to COVID. Compelling the vaccination of public employees and military personnel with vaccines that were not thoroughly tested. The closing of schools and small stores while favored big box stores were allowed to stay open.

Dr. Jensen never suggested that the actions taken by President Biden and Gov Walz killed people, although the failure of Gov Walz to move swiftly to call out the National Guard certainly resulted in the burning of a lot of buildings and the breaking of a lot of glass.

What Dr. Jensen is saying is that we cannot turn away from the incremental steps that we are seeing. We must, as he has, elevate our concerns and not let the media continue to ignore what is happening. We have to stay engaged.

It is clear that Dean Phillips does not have a grasp on what the solution should be.