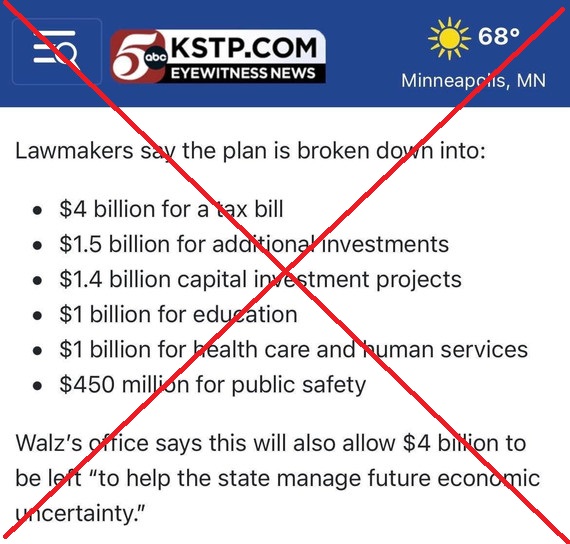 Remember the broad agreement announced by Gov. Walz and top legislative leaders on May 16 on how the billions of dollars of the state’s budget surplus would be spent?

On Monday, May 23, the legislature ended its 92nd session sine die. That means without a defined time to reconvene.

The session ended without final decisions on tax reductions, spending increases, or election process reforms. The Bloomington Local Area Sales Tax option was in the tax bill. As reported by Sen. Mark Koran (R-North Branch), “Like all others, it didn’t pass out of conference committee. So, no action was taken on it.”

The budget bill was not the only legislation impacted by last minute tactics. As the New House Republican caucus pointed out in a video report,  Gov. Tim Walz essentially blocked legislation that would have strengthened the integrity of our elections.

Republican lawmakers did secure a major win earlier this session. As reported in the last newsletter the Republican-led Senate assured that the Minnesota Unemployment Insurance Trust Fund was replenished. It was done primarily using federal funds that would otherwise have been available for Gov. Walz to spend as he wished.

Although there have been reports of some behind-the-scenes negotiations, the Senate leadership has publicly remained steadfast in its opposition to a special session.

There is no threat of a government shutdown. This was the year for bonding bills and infrastructure investments. The state government was already fully funded through June 2023 based on the work of the legislative session in 2021.