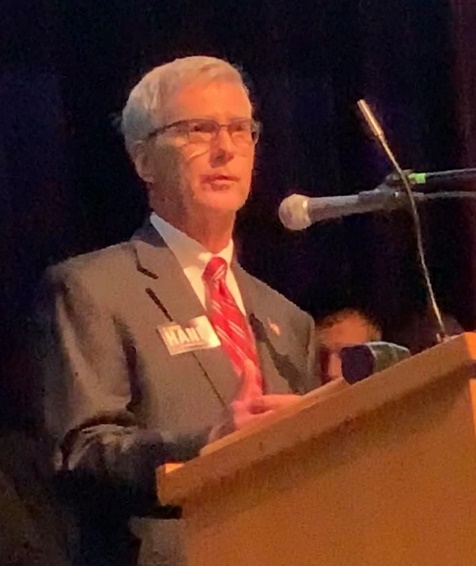 Delegates, alternates, and observers crowded into the Hopkins Art Center for a special session of the governing body of the state party, called following the resignation of Chair Jennifer Carnahan in late August.   The attendees learned that the state party was operating with minimal staff.  Receipts from registrations for the State Central Committee meeting would provide some positive cashflow, but donations had essentially ceased awaiting initiatives by the new party chair.

Four candidates  initially presented themselves to 338 delegates and seated alternates who were authorized to vote.  After two rounds, the field had been narrowed to former Senator David Hann and businessman Jerry Dettinger.  To Phil Parrish’s credit, he voluntarily withdrew from the race to allow a decisive third ballot before time ran out on the rented hall.

Jerry Dettinger and David Hann focused on what they offered the party and avoided either political or personal attacks.  Both Hann and Dettinger promised to recruit experienced executive staffers and to promote election integrity and restore voter confidence.  Dettinger emphasized his business experience and his intent to pledge $50,000 of his own money to encourage donations from others.  Hann spoke of his experience in leading the Senate Republican caucus through a similar crisis and building the majority that Republicans currently enjoy in the MN Senate.

The contest remained close through the third and final round of voting. David Hann secured 53% of the vote and was declared the new MN GOP chair. Despite the ardent campaigns of both men, Jerry Dettinger graciously promised to remain active in the party.

David Hann echoed Dettinger’s tone. He thanked Jerry for conducting a positive campaign and hoped that the two could work together to rebuild the senior ranks of the party. He promised to pursue the plan to audit the party finances, investigate the allegations of misconduct raised by former party staffers, and review procedures for handling future personnel complaints, as funding permits. The reaction of the meeting attendees to the remarks of the two men reflected a renewed sense of unity and enthusiasm for the future of the party.

Party Deputy Chair Carleton Crawford announced that he would be stepping down at the end of the meeting, although he would remain available to help in the transition. Chair Hann nominated former Lieutenant Governor candidate and northern Minnesota native Donna Bergstrom to replace Crawford. Bergstrom will need to be confirmed by the state party executive committee and will be subject to a vote of the State Central Committee at its next regular meeting in December. Many were pleased to have Bergstrom, a well-spoken community leader, a native American woman, a military veteran, and a tireless grassroots activist, as the party Deputy Chair

State Party Secretary David Pascoe reported that he would be leading efforts to review the party constitution and bylaws to improve transparency. Changes will also be recommended to ensure that when concerns are raised by a minority of state executive committee members, those concerns can be explored. Revisions would be voted on at State Central (Dec/May) and State Convention (May).