Senate District 49’s sixth annual “Fall Conversation” once again presented some great wine tasting options and a panel discussion that took the promise of the new Republican legislature head on. 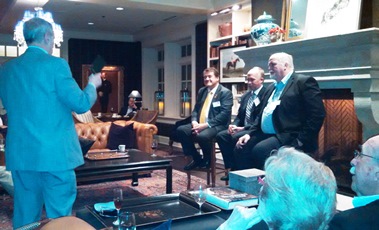 Over forty people turned out for the event at the Edina Country Club on Thursday evening, November 17.  The ideas presented by the panel members were appropriately challenging.

The panel members brought their own perspectives, coming from different backgrounds within the Twin Cities.  Mitch Berg is an outspoken political pundit and conservative radio talk show host on AM1280.  Rep. Jerry Hertaus was recently re-elected to his third term as the representative to the Minnesota House from District 33A with 68% of the vote.  Peter Nelson is Vice President and Senior Policy Fellow at the Center of the American Experiment.

SD 49’s own Bill Glahn was the panel moderator, and he broke the ice very quickly.

Were any of the panel members surprised by the Vote?  None of them expressed any surprise.  Nelson, for example, expected that Republicans would hold on to the MN House.  It did not shock him that the MN Senate flipped.  It did not shock him that Trump did as well as he did.  Why?  Minnesota historically has had an economy that performed above the national average.  For over a decade, economic performance has been maybe average, even below average.  Minnesota jobs are not as good as they have been.

Berg noted that the recent increases in individual health insurance premiums surprised him.  After considering the impact, he didn’t find any of the political outcomes surprising.

The panel noted that the DFL felt that they had a model that worked for them.  “If you raised taxes and issued new regulations, Minnesotans would continue to vote you in.”  This election, voters did not give the DFL the mandate to continue with their model.

Rep. Hertaus noted that $2.1B of taxable income is leaving Minnesota every year, taking investable capital out of the state.

Nelson felt that the best opportunity offered to the Republican legislature this coming session is not to address taxes but to address regulations.

Berg added that the perceived attitude of the state toward business must change.  The state has developed an arrogance regarding business concerns, and that must be reversed.

Moving on to the health insurance crisis, Nelson noted that Obamacare blew up a pre-existing system that largely worked.  Hertaus recognized that the legislature needs to implement health insurance policies that increase the competitive marketplace.  He proposed one way to do that would be to get rid of group health insurance plans so that everyone is now in the individual marketplace.  Return insurance to a means of covering catastrophic health events rather than including mundane doctor’s appointments.  He pointed out that using last year’s budget surplus to reduce individual health insurance premiums does not address the root problem.

Nelson felt that the challenge for Republicans in the MN legislature is to carefully set expectations.  “We will not be able to fix the health insurance cost issues in two years.”

The panel set a high bar for the next “Conversation”, which we will plan for late April or early May. 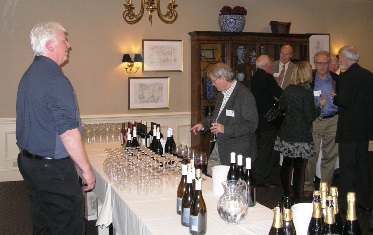 Five wines that would complement holiday meals were offered by Dan Condon of United Penn Lake Liquor, 8915 Penn Ave. South, Bloomington.  We urge your support of Dan and his store.  Stop in and ask for his wine recommendations.