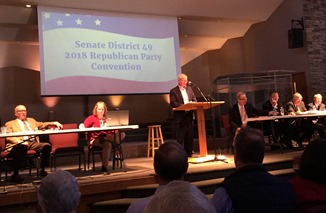 Senate District 49 is a leading local Republican organization in Minnesota, based on the strength and knowledge of its Executive Committee. We also encourage new blood in leadership roles, with the SD49 bylaws imposing term limits. Several officers will be leaving their positions in 2019. A description of the executive officer positions can be found in the SD49 Bylaws, Article IV, Section 4.

So, if you are interested in serving as an executive officer or have any questions about serving, please let us know. You need to be a Republican and live within the boundaries of Senate District 49. Contact Mike Lehmann at [email protected] or 612-839-0761. He will set up an interview with you before the convention as part of our search process.