The Board of the Edina City School District publicly expressed its concern in a 2016 letter to the Mayor and City Council that the District is being negatively impacted by the Edina City’s Tax Incremental Financing scheme for the Grandview development. 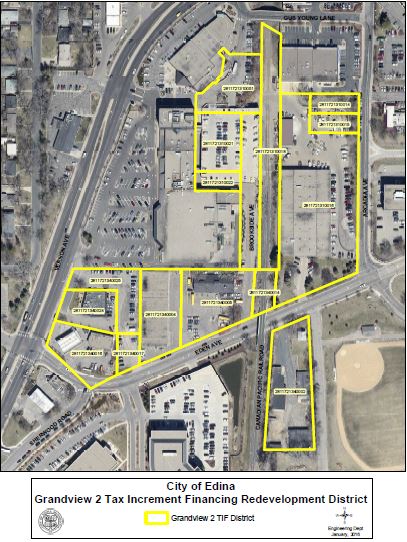 Enabled by the state legislature since the 1970s, TIF is a means that local city and county governments can use to fund developments that might not otherwise be afforded "but for" the TIF supported infrastructure financing. Given that the development of a property will increase its value, the property taxes flowing from that property will also increase. In a defined “TIF District”, the taxes on the increase in property value (Tax Increment) over the original property valuation would be diverted to the developing agency for use in building and maintaining infrastructure.

TIF might be seen as beneficial for Edina taxpayers: no need to raise local taxes to fund a large scale commercial project. Of course, such projects in Edina are bound to substantially increase in value, which means a large chunk of future property taxes will flow to the city’s development agency (the Edina Housing and Redevelopment Authority, or HRA) until the project is “decertified” or 26 years passes, whichever comes first.

Why is the Edina School District concerned? Fully 50-to-55% of the incremental taxes levied on each of Edina's TIF Districts are diverted from the school district. Edina has five TIF Districts (Pentagon Park, Southdale 2, Grandview 2, 66 West, and 50th & France). This tax revenue instead will flow into Edina’s HRA.

Edina School District has been conducting a referendum about every third year to make up revenue needs, a portion of which was from TIF levies diverted to the HRA. The bonded debt obligation reported to the Secretary of State Minnesota for the school district in the application for State approval of the 2015 referendum was estimated to be $780,000,000. TIF bypass has contributed to this mountain of debt.

Edina has added its own unique twists to TIF.

So, the Edina City Council arrogates to itself the right and the power to set initial property values and reallocate future tax revenue without outside review.

But it gets better — Hillcrest Development purchased the 43-acres of Pentagon Park in 2012 for $7,865,000. The ‘Initial’ TIF agreement approved by the Edina City Council would have $36,286,666 bypass the Edina School System and flow to the HRA and subsequently to the developer. However, concurrent with the TIF approval process in 2014, the developer initiated backdoor discussions with the City on some “other” aspects of the approved agreement. The result of those private conversations was the reduction of the assessed valuation of the Pentagon Park properties from $53,659,400 to $16,299,500, a nearly 70% decrease! This lowered the bar for the flow of excess tax increment funds into the city-administered HRA.

Subsequently, the developer initiated a petition with a tax court for overpayment of property taxes for the years 2010 through 2013, based on the reduced valuation. The developer received a positive judgement and the school district received a bill for $1,200,000 for the refund of overpaid taxes. The lost revenue to the school district due to the reduced valuation could continue for the full 26-years of the TIF if the City Council allows it. Since then the developer (Hillcrest), has done almost nothing to develop the Pentagon Park property during the 5-years since purchase, and the 4-years of the TIF.

Edina taxpayers need to get involved!

Clearly, the Edina City Council does not appear to be taking any actions to reform this process. Here are some actions that Edina taxpayers can take: