As we turn our attention to the 2020 elections, we note that three people well known to us in Senate District 49 already have campaigns officially underway. 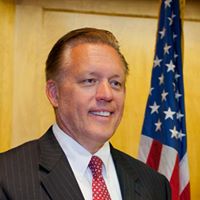 First to announce was Brad Aho, a member of the Eden Prairie city council for 16 years, when he declared his candidacy for Hennepin County Commissioner in District 6. District 6 includes Edina, Hopkins a portion of Eden Prairie, and much of the Lake Minnetonka area.

Brad Aho made his intentions clear back on September 30 on the Twin Cities New Talk radio station. Back in February, he was the featured speaker at our February dinner program. He spoke then about how Eden Prairie was dealing with the need for affordable housing and the consequence of higher density.

Brad points to his long experience on the Eden Prairie city council as solid preparation for serving as a Hennepin County Commissioner. “I've worked with residents and city staff to increase efficiency and effectiveness to keep our property taxes affordable for residents and businesses all while continuing to improve city services. The city has received numerous awards, including the Best City in the Nation to live and retire, the Digital Cities Award for the innovative use of technology, and is financially sound with a AAA bond rating.”