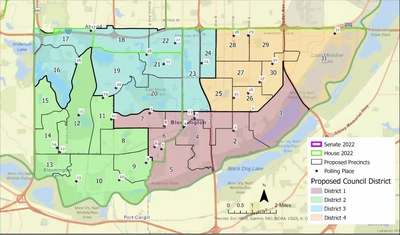 The new Congressional and legislative district boundaries released on February 15 cut through some existing precincts. Minnesota cities are also required to redraw their Council Member district boundaries based on the population counts of the 2020 Census. The city staffs of both Bloomington and Edina have issued preliminary maps for consideration by their city councils and their citizens.

The Edina City Council has approved, and the Bloomington City Council is considering, a reduction in the number of their respective precincts.  Such a reduction, coupled with the redrawing of the precinct boundaries, will likely affect some of the recently-elected precinct officers. Those adjustments will be addressed by senate district leadership after the final precinct maps are approved. It will not affect the senate district delegates and alternates that were elected during the February 1 caucuses. They will automatically become delegates and alternates of the new precincts.

The proposed Bloomington map shown above and on the City's redistricting page reduces the number of city precincts from 32 to 31. If adopted, precinct numbers will change for every area except Bloomington P17.  Per Bloomington City Clerk staff, the precinct renumbering was to make numbers within city council districts sequential. About a fourth of Bloomington voters will go to a different building to vote, due to boundary changes.

On March 1, the Edina City Council accepted a staff recommendation to reduce the number of Edina precincts from 20 to 16, as shown on the map above.

The rationale given by Edina staff for the reduction in the number of precincts is outlined below. More information can be found by going to the City of Edina website and downloading the agenda for the March 1 City Council Work Session Meeting.

All new redistricting boundaries go into effect for the State Primary on August 9, 2022.
Edina expects that the City Council will adopt precinct boundaries and polling place by March 22.
Bloomington anticipates the remaining redistricting process will be :

Districts for Hennepin Commissioners and other districts are expected to be approved by April 26.